My 'Staycation' Includes the BC Mining Museum 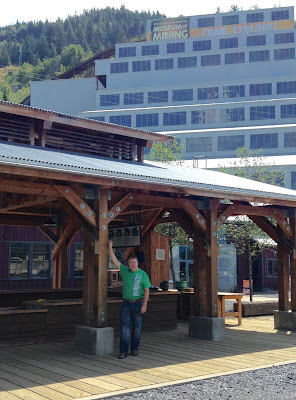 As part of my current 'staycation', a term I am becoming more familiar with, I rode out on my Triumph Tiger 800 to the BC Mining Museum located about 50 kms up the coast north of Vancouver at Britannia Beach.

For years I have driven past this unique piece of Canadian history and gave it little attention. Opened around 1904, much of Canada's copper was mined here right up until it closed in 1970. During that time, it employed thousands. Mining was, and to a lesser extent still is, hard, dirty, dangerous work in those early days. You cannot really appreciate how much without touring these facilities.
The museum was impressive. The tour included a brief ride into the mine, drill and muck machine demonstrations, a short video and we got to handle some raw rock with copper in it and freely explore the grounds after the guided tour ended. For the $27 entrance fee, it would have been better to bring it all to life with some period costumed actors and more demonstrations. As it was, the Museum seemed more like a ghost town haunted by tourists.
To my knowledge, there was no memorial to the hundreds of men that must have died from working in the mine over the years handling explosives, crushed by cave-ins and mortally injured in accidents of all sorts as well as lung disease due to exposure to the silica dust created while dry rock drilling. It's as if the Mining industry only wants us to see a 'clean' face of mining, with it's multi-million dollar renovated museum and reminder that we copper consumers are an integral part of the industry, too. I left asking myself if the colour of copper was more red than brown and what was the real cost of extracting these metals in the way that we did back then and if we do still.
Posted by Unknown at 20:45 No comments:

Damaged Riding Gear is a Hazard U Don't Need

I recently replaced a pair of damaged Storm Rider rain pants with a new two piece River Road suit, and also purchased new Icon gloves to replace my worn and damaged Icon insulated and water-resistant gauntlet gloves from www.canadasmotorcycle.ca Of course, I continued to use the worn out patched gloves until they sprang another leak or perhaps to keep the new pair new for as long as possible. This, as I discovered today, was a mistake. While riding home I approached a stop sign at a T-intersection and touched my signal indicator with my left thumb to turn left. 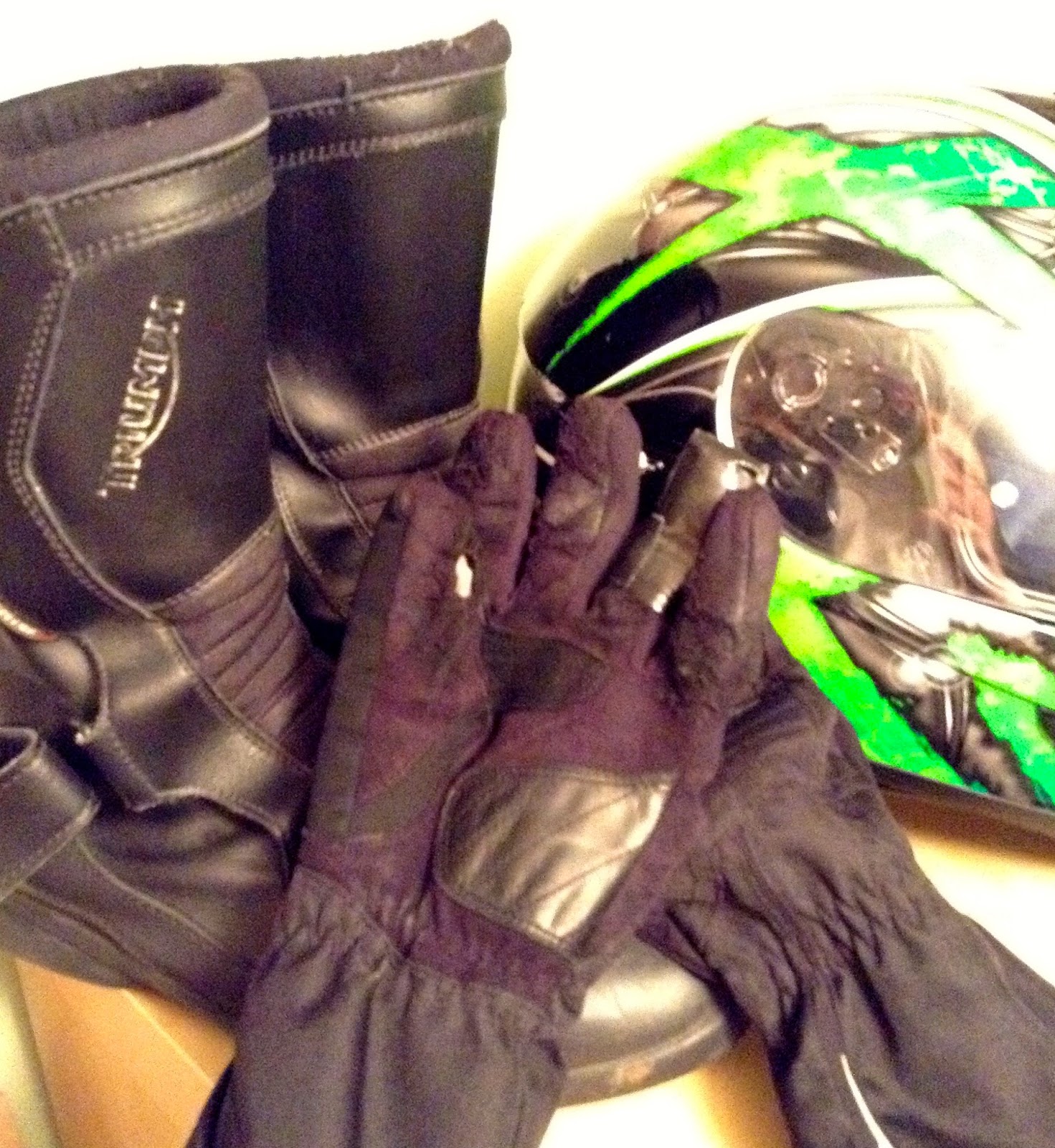 As I started through, I could not pull my thumb away so my left hand was basically caught there and I was unable to easily grip the clutch. I quickly pulled over, turned the ignition off and saw that a hole in my glove had hooked the tiny black turn signal indicator switch which I promptly released. I had an extra pair of old gloves in my topbox so I put those on and continued safely home. Several times this past year I have been made aware of the importance of making sure that I as a rider am fit, that my bike is mechanically sound and also that the gear I am wearing is in good condition so as not to impede my abilities to control the bike while keeping me protected. Today was another one of those days. The old pants and gloves are now in the garbage where they belong, and the new good ones will be on me next time I ride as they should be.
Posted by Unknown at 21:52 No comments:

To stay dry, a good rainsuit is a necessity when riding but especially on the Pacific 'Wet' Coast. We tend to get more rain than the interior of British Columbia or Central Canada particularly at this time of year during October and November. I've been wearing a two piece Nelson-Rigg Stormrider rainsuit for about two years now over my motorcycle jacket and jeans, but it is now showing signs of serious deterioration in the pants. About two weeks ago while riding to work in the rain I felt the entire seat of my pants and crotch area get so wet I thought the rainwater had made it's way down my back and seeped into my pants at the waist. 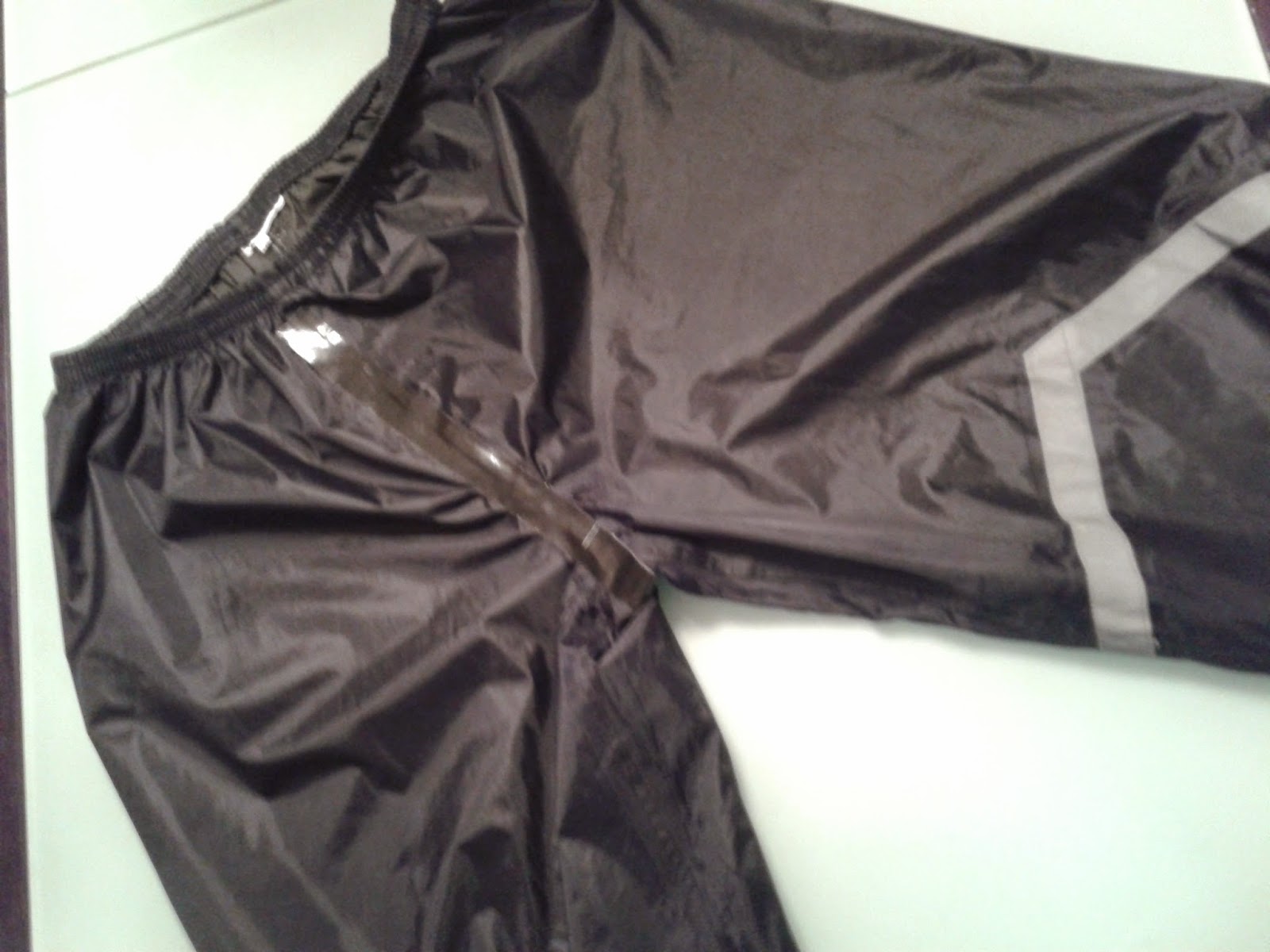 When I later removed my Stormrider pants, however, I could see the stiching was worn and undone in the crotch area and the PVC material that lined the inside and that made it waterproof had deteriorated and fallen off in patches. As a temporary solution, I grabbed a needle and thread and did my best to sew the crotch back up and then used some black Gorrilla tape over the seam where I had sewn. Naturally, the "two-year hassle-free warranty" offered by Nelson-Rigg has likely expired and I cannot locate my original receipt so replacing the pant with like kind and quality at no cost is not going to happen. So, I am shopping for a new two piece rainsuit, but do I get an even better one than the Stormrider I bought for about $75 a couple years ago or spend about three times as much on an Olympia Moto Sports black/neon yellow two piece Horizon rain jacket and pants? I have an Olympia black/neon yellow armoured jacket with linings and love it. The quality is among the best you can get. Since the Stormrider jacket is still okay and I have a pair of Joe Rocket Alter Ego 12.0 pants, maybe I'll take plenty of time shopping.
Posted by Unknown at 15:46 No comments:

A research paper recently published in the British Columbia Medical Journal unfairly targets older male motorcyclists. See http://bcmj.org/sites/default/files/BCMJ_56_Vol8_motorcycle.pdf The study examines limited data between 2001 and 2010 and reveals an increase in the rate of hospitalization among older motorcyclists. This could be for many reasons, but the researchers nevertheless feel compelled to produce their own biased and faulty conclusions. For example, older motorcyclists are increasing hospital costs and are a greater burden on the public purse. This is ageism and the same is often said about all seniors in our society these days. Another example, older motorcyclists need injury prevention training by health care professionals regarding age related physical and cognitive impairments that can influence riding skills and behavior. They do not even know the causes or have an explanation for the increased hospital rate yet they are already assuming that it is age-related and requires some kind of 'education' from a health nurse who may never even have sat on a motorcycle, let alone owned one. 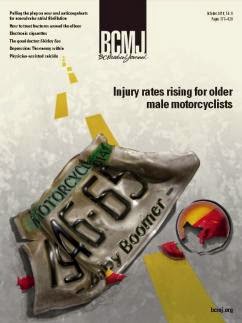 The study is replete with disclaimers regarding research data and the lack thereof, such as the following: '...we did not have data on the circumstances of the crashes, such as time of day, invovlement of drugs or alchohol, use of safety equipment, weather conditions, or other information that would help us to understand trends and target safety efforts.' There are so many factors that may explain the increase in rate of hospitalization, (eg. distracted, inconsiderate motor-vehicle drivers, inadequate training or licensing requirements, powerful heavy bikes, poor attitude, poor economic decisions) but to make it appear worse than younger riders or compare it to motor-vehicle hospitalization rates is not useful and a gross distortion of what may really be going on.

This is a specious study that in my opinion is incomplete, faulty and poorly vetted so it never should have been published. It relies on dubious stale data up to a period that is already 4 years old and not current. The dissemination of this kind of misinformation can do more harm than good. It erodes public confidence in the health care and scientific professions, increases skepticism towards even good studies that include any kind of statistics and certainly does nothing to reduce injuries. (On a related topic, see my December 2012 post entitled, Middle-Aged Men .....based on my own armchair analysis of crash statistics in British Columbia).
Posted by Unknown at 20:48 No comments: